Gretchen Wheen had an incredibly sharp mind and very generous spirit, along with a passion for bees and beekeeping. She was one of Australia's best known beekeepers, and for good reason – Gretchen was one of the first suppliers of quality queen bees to Australian and international commercial beekeepers. She was a pioneer in instrumental insemination of queen bees, and passionate about the importance of stock improvement.

Gretchen was deeply conscious of the link between honey bees and food security.​

Because of this, she was concerned by the huge problems facing the small but strategically important beekeeping industry.

Her commitment was such that she made a living bequest by donating her estate to establish the Wheen Bee Foundation, with the aim of supporting and developing research, innovation, training and communication to ensure a viable beekeeping industry to protect our food supply.

In 2005 Gretchen received the Goodacre Memorial Award in recognition of her services to the beekeeping industry. This award is the peak national award bestowed upon individuals who have provided significant service to the Australian beekeeping industry.

Gretchen was born in London in October 1929, one of two daughters of Aldwyth and Arthur Wheen. Both her parents were born in Australia, but they lived their adult lives in England. Gretchen’s sister, Sally, died of meningitis when she was only five.

The Wheen family lived in the Quaker village of Jordans in Buckinghamshire, on a small farm called ‘Further Pegs’. Gretchen’s mother kept a number of beehives and helped to shape Gretchen’s understanding of beekeeping. Her father was a highly decorated soldier in WWI, and a Rhodes Scholar. Arthur eventually became Keeper of the Library at the Victoria and Albert Museum.

Soon after the outbreak of World War II, Gretchen’s parents sent her to Australia ‘for safe-keeping’. Until 1946 when she returned to England, she lived with her maternal grandmother and aunt in Sydney and attended school there.

In 1951, she returned to Sydney where she completed a Bachelor of Arts at the University of Sydney.

While at university, Gretchen spotted a swarm of bees on her way to a lecture. Using techniques she had learned from her mother, she collected the swarm and set up the hive on the veranda of her cousin’s house.

As her small apiary expanded, Gretchen began to relocate hives to a family property in the Roseville region of Sydney. Moving away from concentrating on honey production, Gretchen developed interests in commercial queen rearing and honey bee breeding, which were to become the focus of her life’s work in apiculture.

In the 1960s, Wheen developed an interest in commercial queen rearing and honey bee breeding and took a Diploma of Horticulture at Sydney Technical College.

She went on to develop a substantial horticultural enterprise on her property at Richmond, west of Sydney. Apart from her beekeeping, she established a pecan tree plantation and cultivated many hundreds of varieties of old-fashioned and heritage roses, which became her passion.

By the mid-1970s, Gretchen had become a leading commercial supplier of queen bees for both local and overseas markets, including Iran and Afghanistan.

She was also to become a leading Australian expert in the art of instrumental insemination of queen bees, studying the technique under apiculture lecturer Neville Cutts at Hawkesbury Agricultural College (now part of the University of Western Sydney). Gretchen built a specialist laboratory adapted for instrumental insemination, which was eventually used by university researchers and visiting professors alike.

In 1976, the Queensland Agricultural College (now part of the University of Queensland) sponsored a bee breeding school at the college, under the tutelage of Professor Jerzy Woyke, from Poland, and Dr Vern Sisson, from the USA. Gretchen was appointed to assist the senior lecturer in apiculture, Graham Kleinschmidt, and the tutors.

Gretchen played an important role in two key outcomes of the program. The first was the establishment of the Commonwealth Honey Bee Quarantine facility at Eastern Creek. Gretchen recognised the need to import breeding stock from overseas, and was instrumental in enabling the facility to be established. She expressed bitter disappointment when, in 2001, the federal government sold off the whole national quarantine complex for what she considered a pittance.

The second program outcome was the establishment of a research project at the Hawkesbury Agricultural College (HAC) to establish a honey bee improvement program for Australian beekeepers. Gretchen provided technical services, including artificial insemination, for the duration of the project, and she served on the HAC honey bee improvement advisory committee for many years.

Gretchen’s sustained efforts in relation to these programs were pivotal to their implementation.

During this time, she also worked in the Sydney metropolitan branch of the Commercial Apiarists’ Association of NSW. 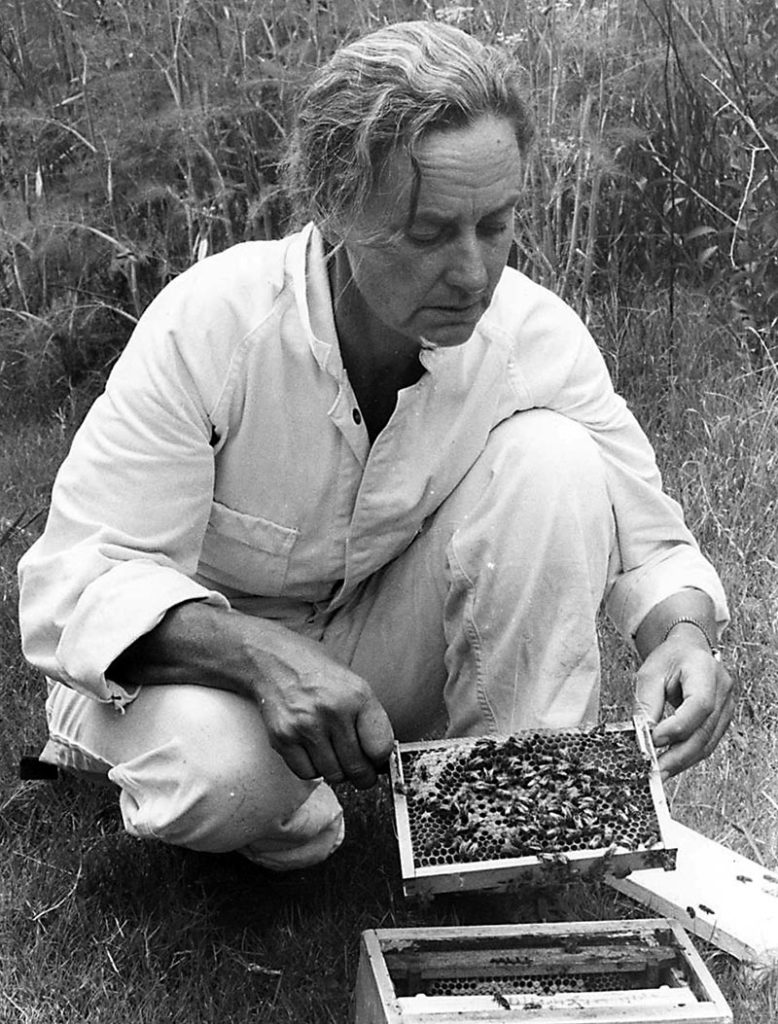 Gretchen was instrumental in developing strong links between leading bee researchers in Australia, Europe and the USA.

In 1978, she enrolled at the Bee Research Institute of Oberursel in Frankfurt, at the invitation of world-renowned Austrian geneticist and bee breeding scientist Professor Friedrich Ruttner. On his visit to Australia a year previously, Professor Ruttner had been so impressed by Gretchen’s skill and attention to detail that he invited her to enrol in advanced tuition in bee breeding, including AI technique, at the institute.

In 1981, Gretchen became centrally involved in a summer school in bee breeding at the HAC. She was responsible for bringing a number of European lecturers to Australia, with whom she had worked in Oberusel in Germany. These lecturers included Dr Volprecht Maul, Dr Hermann Pechacker and Tilly Kühnert – all distinguished professionals in their respective fields. Gretchen made her laboratory available for the school, and she provided her home as a meeting place.

A significant outcome of the school was that it brought together some of the world’s leading experts in bee breeding with Australian counterparts and researchers. This resulted in an exchange of information and ideas and cooperation between these international experts for many years.

During this period, Gretchen also visited European bee breeding institutions on several occasions, both to expand her knowledge and to bring back to Australia ideas and information which could assist bee breeding in Australia.

In the mid-1980s, Gretchen and Tilly Kühnert provided the AI required to maintain two significant breeding and stock improvement programs.

The first was the Eastern States Bee Breeding project at HAC, established by the Honey Research Committee in 1986. The project was modelled on closed population breeding principles, and based on 30 lines recruited from the USA, New Zealand and from within Australia.

The second was the Western Australian bee improvement program, which was funded by the Honey Research and Development Committee in 1987.

In addition to technical services she performed for these two projects, Gretchen provided logistical and back-up support, including making up and maintaining nuclei in the bee yards.

Although both programs were discontinued in 1992 and taken over by industry consortiums, Gretchen continued to provide the service of artificial insemination of the many hundreds of queens necessary to continue the program. 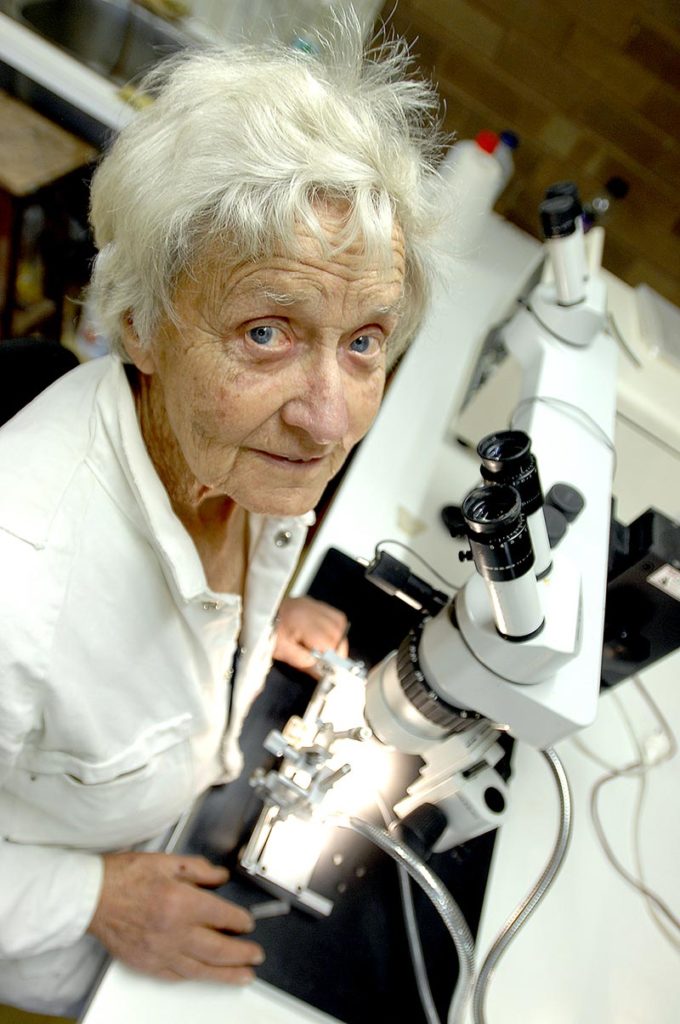 At the end of the 1980s, Gretchen decided to close down her queen rearing business in order to maintain her involvement in bee breeding and research, and to enable her to concentrate on her horticulture enterprise.

Her vision for an Australian bee breeding and research facility was never very far from the surface. She envisioned a facility at an institution, which would be sponsored by the industry and geared to the systematic genetic improvement of stock.

Gretchen also established an extraordinary rose collection and garden on her property, with over 400 varieties of old fashioned and heritage roses.

Gretchen earned the respect of numerous beekeepers and researchers with her selfless contribution to the well-being of this strategically important industry. She knew that without bees to provide pollination services for our crops, our food supplies would be under great threat.

So Gretchen dedicated much of her estate to the establishment of the Wheen Bee Foundation.

Interested in making a lasting legacy that helps protect the bees?